Investigating the effects of biochar on soil fertility

There is a range of possible investigative work that can be done with biochar or other substances that could affect soils and soil fertility. Some (as described in the IBI Biochar Trial Guide on the IBI website) is beyond the scope of schools. However, a medium-term student project at Advanced level could explore some biochar issues, and even at Introductory level, students could investigate the effect of adding biochar or charcoal to the growing medium used to grow seeds in pots.

Biochar has been chosen as a focus for this work because its use has recently been proposed as a contributor to reducing atmospheric carbon dioxide. See the background information below.

This will be a medium-term project following an introduction to biochar. Discuss a range of methods for assessing differential growth of seedlings in different growth media, and decide which is most reliable. Allow the seedlings to grow for a few weeks and then assess the growth in a final lesson.

Scoops (trowels or large spoons) to handle the biochar:soil mix

1 Biochar is readily available in the form of locally sourced charcoal made from timber, and is available from many DIY stores and garden centres. Grind in a mortar and pestle, or coffee grinder (not later used for coffee) to make 1-3 mm granules before mixing with your growing medium (Note 2). If you, or any member of your school team, are gardeners who regularly make bonfires of garden waste material, you could try gathering charcoal from ash heaps for comparison.

Refer to CLEAPSS Hazcard 21 for hazards of powdered carbon. Finely powdered charcoal is a fire hazard. If using larger than mortar and pestle quantities, dampen after weighing and before grinding to reduce the risk, and avoid inhalation of the dust. You could grind small quantities in a coffee grinder dedicated to use with laboratory chemicals.

2 Multi-purpose garden composts often contain a significant amount of slow-release fertiliser. Although specialist seed compost usually has less fertiliser, it is still a fertile medium. Locate a patch of poor soil that you can dig up from the school grounds or a roadside, or use ‘spent’ compost (from pots in which plants have been growing for more than a season without additional fertiliser) and add some washed sand. When working with soil collected outdoors, beware of animal faeces and ensure that students wash their hands thoroughly with soap and hot water afterwards.

3 Broad beans (Vicia faba) especially varieties such as Aquadulce will germinate throughout the year, but take some months to reach full size. Lettuce (Lactuca sativa) is readily and cheaply available in large quantities; most varieties will grow quickly and produce detectable differences in different soils within a few weeks, if you can provide a light and warm place for growth. In the normal growing season you could try other plants of interest, such as corn or tomatoes. 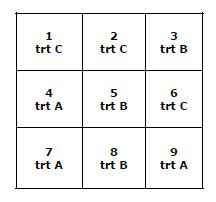 4 If putting several pots of each mixture together in a tray, it is worth arranging them so as to limit edge effects or other  environmental factors. This array for three treatments (such as three different mixtures of compost and biochar) is called a randomized bench layout; it compensates for effects due to uneven lighting or drafts of cool air. See the Guide to conducting biochar trials on the International Biochar Initiative website.

If you want to develop larger scale trials and can use an area of school grounds or an allotment space, a similar layout for blocks with different treatments is recommended.

5 These randomised bench or block layouts are different from the Latin square arrangement sometimes used for field trials; it is also an important strategy for sampling in ecological and genetic work. Field experiments on plant performance usually take place in situations where there are considerable variations in the physical environment such as drainage, fertility, and climate, and it is not possible to eliminate them. There may also be hidden variations with an important effect. This Latin square layout allows the investigation to take account of such variations, but does not eliminate their effect. Each treatment is repeated and occurs once in each row and once in each column. When analysing the results, it is best to adopt the simple procedure of totalling the results of the A, B and C subplots respectively.

Calculating the mean results for each column and row should give numbers that do not differ significantly. If they do, this is an indication that the Latin square has not achieved its purpose. For example, if row 1 has a significantly higher mean yield than row 2, you would deduce that the experimental treatment has been superimposed on a significant underlying factor causing a difference in soil fertility.

If it proves to be successful, the widespread use of biochar to improve soil fertility or to reduce carbon emissions could have a dramatic impact on our society and on agriculture world-wide.

SAFETY: Take appropriate hygiene precautions after handling soil and biochar, especially if the soil used could be contaminated with animal faeces. Avoid inhaling the dust when grinding the biochar. Moisten after weighing and before grinding to reduce dust in the air.

a Mix biochar and soil in a range of proportions for example, with added 4% or 2% by mass or 0% biochar.

b Set up at least three pots of each mixture and an equal number of each treatment. Label clearly according to the proportion of charcoal and compost.

c Plant seeds in each pot according to packet instructions – for example, one or two broad beans per 9 cm pot, or a sprinkling (10-15) of lettuce seeds, thinning to one bean or 2 lettuces after germination.

d Water all the pots in the same way.

e Set out the pots in a tray or container and leave to grow in a suitable well-lit place, watering as needed. See Note 4.

f Over the coming days, after thinning to one or two plants per pot, note each day how big your lettuce plants are. Record with photographs and measurements.
or
g Over the coming weeks, note how tall the plants are if growing something larger such as broad beans. After 8 weeks or longer if possible, harvest the plants and assess the total biomass or dry biomass as a measure of yield.

The context for this work could be the carbon cycle, or global climate change caused by greenhouse gases. Current investigations of biochar have been stimulated by concerns for reducing our carbon footprint. There is evidence of active enrichment of soils with charred rather than burnt plant matter in the soils of the Amazon basin farmed by indigenous people before European conquest of the Americas. These soils (called Terra Preta or ‘black earth’) are significantly more fertile than the natural red soils of the area.

There is scope for extensive discussion about how to measure the growth of plants. Simple measurements of length and width of leaves, or of the plant as a whole, number of leaves, total biomass at the point of harvesting, or dried biomass are all options. It is useful for students to realise for themselves that decisions have to be made, and that consistent measurements need clear descriptions of method. If you can start a few plants ahead of time, and then ask students to measure them, you will probably find a range of results for each plant. This could be your starting point for discussion.

In any study of a new soil additive, it is good practice to test the additive to check that it is not toxic to plants, especially germinating seeds, before testing on a larger scale. If you do not have time for a long-term investigation but are keen to work with biochar, a toxicity test measuring germination rate might be preferable. Lettuce, radish and clover are recommended for such tests with biochar (or any other soil additive) to investigate whether or not germination is inhibited. Germinating seeds rely on their own reserves early on, and soil fertility makes more difference when the plants are more fully grown. So, a germination test assesses whether any substances present in a soil additive are having a negative effect on plant growth. An experiment of longer duration allows conclusions to be drawn about differences in soil fertility.

Biochar is a fine-grained, highly-porous charcoal produced from carbon-rich biomass feedstocks, including forestry waste, animal manures and agricultural waste products such as husks, shells and stover. (Stover is the dry stalks of crops such as corn, sorghum or soybean that remain in a field after harvest.)

Biochar is produced by pyrolysis or gasification (heating the biomass with little or no air) in a process similar to the production of charcoal.
However, the primary use of biochar is as a soil improver rather than a fuel. Biochar has been shown to add value to soils in terms of fertility, particularly to acidic soils. The exact details of the mechanism of action are not fully established, but it may act by filtering out and retaining nutrients from percolating water in the soil or by changing crumb structure.

Biochar shows a mean residence time in the soil in the range of hundreds to thousands of years. This makes it a long-term carbon store (compared with uncharred biomass) and so a long-term contributor to climate change mitigation.

Some wastes proposed as feedstock for making biochar are currently burned or composted. This quickly returns part or all of their carbon to the atmosphere. In the case of anaerobic composting or landfilling, methane is produced which is a more potent greenhouse gas than carbon dioxide.

Clearly, however valuable it is as a carbon store, biochar would not be a good soil improver if it causes a significant negative disturbance to the soil ecosystem.

www.biochar-international.org
The website of the International Biochar Initiative – a registered, non-profit organization supporting sustainable biochar production and utilisation systems which remove carbon from the atmosphere and enhance the Earth’s soils. From here you can download the Guide to conducting biochar trials from which the practical idea above has been adapted.

BBC website
These two pieces on the BBC website give further information about biochar:
news.bbc.co.uk/1/hi/sci/tech/7924373.stm a March 2009 article reporting James Lovelock’s view of biochar
www.bbc.co.uk/bloom/actions/sustainablebbq.shtml a piece in the ‘Bloom’ section about using locally sourced biocharcoal for barbecues.