Making a spread or ‘lawn’ plate

Notes based on information in 'Basic practical microbiology' © Society for General Microbiology.

Refer to the standard procedure Aseptic techniques before starting this or any other microbiology practical work.

Spread or ‘lawn’ plates should result in a heavy, often confluent growth of culture spread evenly over the surface of the growth medium. This means they can be used to test the sensitivity of bacteria to many antimicrobial substances, for example, mouthwashes, garlic, disinfectants and antibiotics.

In some situations a pour plate is better for working with antimicrobials, as it is essential to have time for a spread plate to dry fully before adding any other materials, such as paper discs soaked in antimicrobials.

1 Sterile spreaders are used to distribute inoculum over the surface of prepared agar plates. You can sterilise a wrapped glass spreader in a hot air oven or sterilise by flaming with alcohol.

2 To flame a spreader with alcohol:
a Dip the lower end of the spreader into a small volume of alcohol (70% IDA) contained in a vessel with a lid (either a screw cap or aluminium foil) or in a glass (not plastic) Petri dish with a lid. Keep the alcohol container covered and 1 metre away from the Bunsen burner flame.

b Pass quickly through a Bunsen burner flame to ignite the alcohol. Ensure the spreader is pointing downwards when and after igniting the alcohol to avoid burning yourself.

c Remove the spreader from the flame and allow the alcohol to burn off. The burning alcohol will sterilise the glass.

d Do not put the spreader down on the bench.

3 Cotton wool swabs can be used instead of glass spreaders. They may be preferable as they avoid the need for using alcohol as a sterilising agent. Prepare them by rolling small pieces of absorbent cotton wool around one end of a cocktail stick. Wrap individually in aluminium foil or place inside a Universal bottle to sterilise in an autoclave or pressure cooker. These sterile swabs can then be dipped into the solution or culture to be transferred, rubbed on the surface of the agar plate, and immediately disposed of into disinfectant. (Note: Cotton buds from a pharmacist are not sterile and may be impregnated with an antimicrobial agent.)

4 Use agar plates with a well-dried surface so that the inoculum dries quickly. Dry the surface of agar plates by incubating for several hours (perhaps overnight) or put them in a hot air oven (at 55-60 °C) for 30-60 minutes with the two halves separated and the inner surfaces directed downwards.

5 CLEAPSS Laboratory Handbook section 15.2.12 suggests some alternative methods of making a spread or lawn plate and considers their pros and cons.

6 The calibrated drop (Miles & Misra) method for colony counts of pure cultures of bacteria and yeast is a more economical method than pour or spread plates. However, the Miles & Misra method is not usually suitable for mixed cultures obtained from natural samples such as soil. The procedure is as for the spread plate, but fewer plates are needed because: 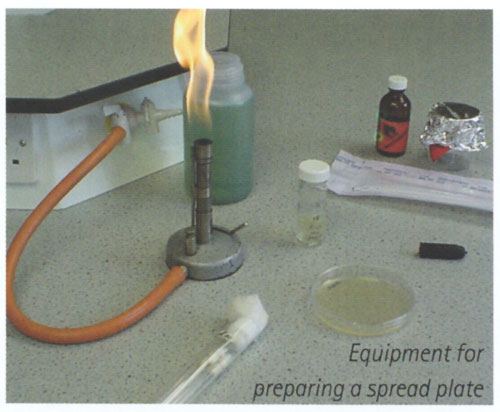 a Loosen the cap of the bottle/ test tube containing the broth culture.

b Remove a sterile Pasteur pipette from its container and attach a teat using your right hand.

c Hold the sterile pipette in your right hand and the bottle/ test tube containing the broth culture in your left.

d Remove the cap/ cotton wool plug of the bottle/ test tube with the little finger of your right hand and flame the neck.

e Squeeze the teat of the pipette, and draw up a small amount of broth.

f Flame the neck of the bottle/ test tube and replace the cap/ plug.

g With your left hand, partially lift the lid of a Petri dish containing the solid nutrient medium.

h Place a few drops of culture onto the surface – about 0.1 cm3/ around 5 drops/
enough to cover a 5 pence piece.

i Replace the lid of the Petri dish. 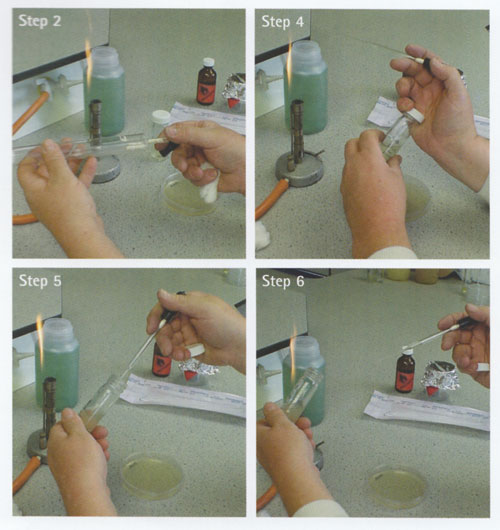 j Place the pipette in a discard jar of disinfectant.

k Dip a glass spreader into alcohol (70% IDA), flame and allow the alcohol to burn off (Note 2).

l Lift the lid of the Petri dish to allow entry of the spreader.

n Replace the lid of the Petri dish. 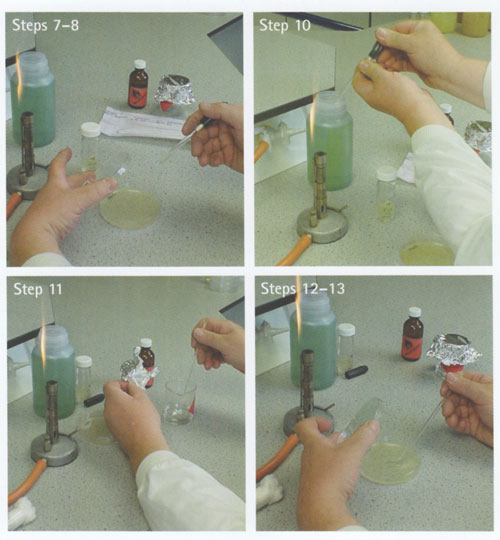 p Let the inoculum dry (Note 4). This will take some time.

q If the plate has not been made to assess the population in a serial dilution, it can now be treated further, for example, for testing antimicrobials, before taping and incubation.

r Tape the plate closed and incubate it in an inverted position.

Microbiology online
MiSAC (Microbiology in Schools Advisory Committee) is supported by the Society for General Microbiology (see above) and their websites include more safety information and a link to ask for advice by email.