Notes based on 'Basic practical microbiology' © Society for General Microbiology.

Aseptic techniques underpin all work in microbiology. Make sure you are familiar with all these techniques before embarking on the other microbiology protocols on this website.

There are some general rules to follow for any aseptic technique.

For transferring fungal cultures which grow by producing a mycelium of hyphae, an inoculation wire with the end bent into a small hook is better than a loop. Use the hook to gouge into the agar at the edge of the culture and pick up a small piece of agar plus hyphae. Transfer this to agar plate or slope, and invert the piece of fungus agar so that the fungus is in contact with the agar in the dish or tube. Ensure that the culture adheres firmly to the new agar. You may decide not to invert agar plates immediately in case the transferred culture falls off the agar.

A leaking pipette is caused either by a faulty or ill-fitting teat, or by fibres from the cotton wool plug between the teat and the pipette.

A dropping (Pasteur) pipette can be converted to deliver measured volumes by attaching it by rubber tubing to a non-sterile syringe barrel.

If a plug accidentally catches fire, douse the flames immediately by covering with a dry cloth, not by blowing or soaking in water.

a Carry out the transfer of cultures as quickly as possible, with tubes and plates open to the air for the minimum length of time.

b Normal practice is to open agar plates away from the body and without removing the lid completely from the base.

c In instances when the lid of the Petri dish may be removed for longer periods than normal, work very close to the Bunsen burner flame to reduce the chances of contamination.

d If you experience frequent contamination of plates with fungal spores, reduce the chance of draughts further, and consider inoculating plates from below with the agar surface facing downwards. In this way there is perhaps less chance of spores settling onto the plate from the air.

a If the loop will not hold any liquid, the wire has not formed a complete circle. Clean the loop by heating to red hot as described below, allow to cool, then reshape with forceps before beginning again. Do not use your fingers because of the possibility of puncturing your skin.

b Hold the handle of the wire loop close to the top, as you would hold a pen, at an angle that is almost vertical. This leaves the little finger free to take hold of the screw cap/ cotton wool plug of the bottle/ test tube. It also ensures that any liquid culture on the loop will run down into the flame.

c Sterilise a wire loop by heating to red hot in a roaring blue Bunsen burner flame before and after use. This ensures that contaminating bacterial spores are destroyed.

d The flaming procedure should heat the tip of the loop gradually. This is because after use it will contain culture, which may splutter on rapid heating and possibly release small particles of culture, forming an aerosol.

i    Position the handle end of the wire in the light blue cone of the flame. This is the coolest area of the flame.

ii   Draw the rest of the wire upwards slowly into the hottest region of the flame – immediately above the blue cone.

iii  Hold there until it is red hot.

v   Allow to cool for a few seconds in the air, then use immediately.

vi  Do not put the loop down, or wave it around.

vii Re-sterilise the loop immediately after use.

i    Place the handle end of the loop in the hot part of the flame, with the loop outside the flame, and allow time for heat to be conducted along the wire to the tip of the loop, pre-warming it.

ii   Draw the wire steadily through the hottest part of the flame so that each part of it glows red hot.

iii  Finally, draw the tip into the flame and let it glow red hot.

ii   Hold until the wire is red hot.

a Remove the pipette from its container/ wrapper by the end containing a cotton wool plug, taking care to touch as little of the pipette as you need to take a firm hold.

b Fit the teat. It is sometimes helpful to dip the teat first in sterile liquid to lubricate it.

c Hold the pipette barrel as you would a pen, but do not grasp the teat. This leaves your little finger free to take hold of the cap/ cotton wool plug of a bottle/ test tube and your thumb free to control the teat.

d Depress the teat cautiously and take up an amount of fluid which is adequate for the amount required, but does not reach and wet the cotton wool plug. Squeezing the teat with the pipette tip beneath the liquid surface introduces air bubbles which may cause ‘spitting’ and, consequently, aerosol formation. Avoid this by squeezing the teat before placing the tip into the liquid. Then gently release the pressure until the required amount of liquid is drawn up, and lift the pipette tip out of the liquid.

f Immediately after use put the contaminated pipette into a nearby discard pot of disinfectant.

g Remove the teat only once the pipette is within the discard pot otherwise drops of culture will contaminate the working surface. 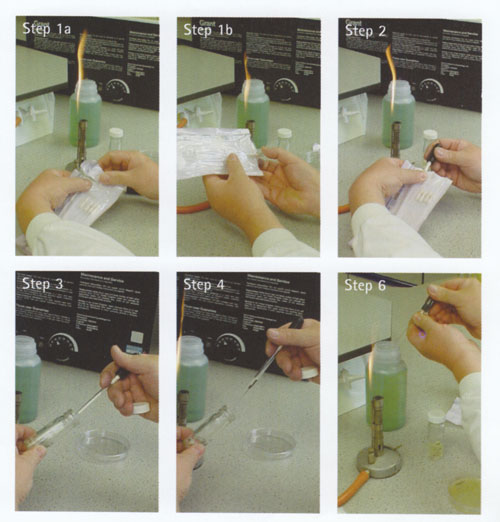 Flaming the neck of bottles and test tubes

This ensures that no microorganisms enter the mouth of the vessel to contaminate the culture or the medium. Passing the mouth of the bottle through a flame produces a convection current away from the opening, and helps to prevent contamination. The hot part of the flame is above the inner bright blue ‘cone’ and the vessel needs to be moved through the flame, not held in place.

a Loosen the cap of the bottle so that it can be removed easily.

b Lift the bottle/ test tube with your left hand.

c Remove the cap/ cotton wool plug of the bottle/ test tube with the little finger curled towards the palm of your right hand. (Turn the bottle, not the cap.)

d Do not put down the cap/ cotton wool plug.

e Flame the neck of the bottle/ test tube by passing the neck forwards and back through a hot Bunsen burner flame.

f After carrying out the procedure required, for example, withdrawing culture, replace the cap/ cotton wool plug on the bottle/ test tube using your little finger. Take care! The bottle will be hot. (Turn the bottle, not the cap.)

g If cotton wool plugs have partly lost their shape, they can be more easily guided back into the neck of the vessel by slowly twisting the mouth of the vessel as the plug is pushed down.

a For technicians, ethanol disinfection is recommended because of its rapid action (around 5 minutes). Technicians will be more experienced and able to deal with the associated fire hazards of working with ethanol.

b For disinfection by students, 1% Virkon solution is safer and cheaper, but the surface must be left wet for 10 minutes.

www.microbiologyonline.org.uk
MiSAC (Microbiology in Schools Advisory Committee) is supported by the Society for General Microbiology (see above) and their websites include more safety information and a link to ask for advice by email.