The case of banded snails – Cepaea nemoralis and Cepaea hortensis – is a well-known example of natural selection. The adaptation of populations of species of this snail in different environmental conditions is used as a case study for evolution in action. Teachers can use Cepaea to encourage discussion about how species change, and to clarify misunderstandings about the natural processes leading to species change.

Distribute the sheets and discuss the data presented.

If surveying snails in the wild, carry out a full risk assessment for outdoor work, and observe appropriate hygiene precautions after handling snails.

Teachers should be careful to introduce the snails in a way that promotes a good ethical attitude towards them and not a simply instrumental one. Although they are simple organisms which may not 'suffer' in the same way as higher animals, they still deserve respect. Animals should be returned promptly to their natural environment or a suitable holding tank after being identified and counted. This supports ethical approaches in field work where animals are returned to their habitat after observations have been made.

a Think about the data about shell colour collected in different months at a particular thrush’s anvil in a wood near Oxford.

b Study the graph of percentages of yellow snails and of snails with one or more band, based on observations made in different habitats.

c Answer the questions and evaluate what this information suggests about natural selection.

Thrushes smash snails on particular stones (called ‘anvils’) to break open the shell and free the soft body of the snail to eat. Collecting snail shells from a thrush’s anvil makes it possible to find out the proportion of the differently coloured and patterned snails the thrush has found and eaten at different times of the year. 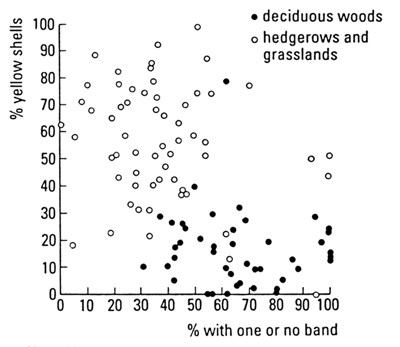 The data show that, in a particular year, 42% of the collected shells were yellow in April, whereas 22% of the collected shells were yellow in June. Plain, unbanded yellow snail shells seem to be better camouflaged against new grass and leaves in the spring (April). Shells with no bands or one band are more common in woodland, and shells with several bands are more common in grassland and hedgerows. The percentage of yellow snails is higher in hedgerows and grassland. The implication of this is that, if the amount of woodland decreased, the numbers of yellow snails would increase.

Banded snails show significant variations. On the right are the first four snails that came to hand in a garden in Wales in October 2009.

At least three selective pressures could act on this population. The colour and degree of banding has an influence on camouflage in different habitats. This means that population characteristics may change as humans make changes to the environment, such as by clearing woodland. One of the key predators of these species is the thrush, which will preferentially select those it can see easily. Thrush populations have reduced significantly over recent years, meaning that the positive effects of some camouflage patterns may be lessened. The darker the shells, the more quickly the snails would warm up in daylight. Warmer snails will be more active and may have an advantage in finding food. If the British climate has become significantly warmer overall, this may be less of an advantage now than it was a few decades ago.

Selection in action – banded snails (187 KB) with questions and answers.

www.evolutionmegalab.org
This project is co-ordinating a survey of banded snails in the UK. It provides background information about the snails, video to show how to collect and identify the snails in your area, keys to allow accurate identification of different varieties of Cepaea, and record sheets on which to collect your findings. Evolution Megalab are trying to find out whether shell colours and bands change where there are fewer thrushes, and whether shell colours are changing with the warming climate. If you register to take part in the project, your data will be collated with data from other participants.