There is a range of simple physical tests of sensorimotor skills. These all involve drawing on paper and can be analysed relatively easily. They give an insight into the role of the cerebellum, and could be used to begin discussions about learning and how to study learning processes.

To save time (and paper!) different groups of students could carry out different investigations and share results as a class. Ensure students have read and understood the

Student briefing and consent form and consented to taking part and including their results in the class data set. A data set for Task 2 is given for discussion if you do not have time to complete the procedures.

Timer, such as stopclock or stopwatch, 1

Paper, in A6-size pieces, preferably scrap paper for second use or recycling, for task 2

Paper with dot in centre, for task 3

Students are effectively test subjects for this practical and so should sign the attached form to state that they understand the procedure, agree to be involved, and have the right to stop their participation and remove their results at any time.

a Set up the apparatus as shown in the diagram. The mirror should be about 50 cm away from the subject. The hardboard sheet must be high enough that the subject can comfortably write underneath it, blocking their view of the star figure, but not blocking the view of the mirror.

b Fix a figure of

one five-pointed star with a double outline in a marked position underneath the hardboard. 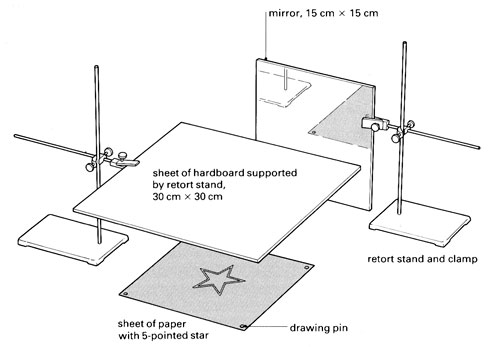 c Settle your subject in place: able to see in the mirror, both the star and the position of their pencil on the paper. No part of the subject’s body should touch the bench.

d At a suitable signal, start a timer and ask the subject to draw a pencil line around the star shape, keeping it between the two lines as much as possible, and as quickly as possible.

e Repeat this at least 15 times, using a fresh star figure each time. Each time, fix the figure in the same place and start tracing from the same point. Write the trial number on each tracing.

f For each trial, record the time taken and the number of errors. Crossing the printed lines of the star figure is considered to be an error.

g Plot graphs of the time taken and the number of errors, against the trial number.

a Ask the subject to try to draw freehand a straight line as close to 7.5 cm long as possible on a sheet of paper (A6).

b Turn the paper face down on the bench. Ask the subject to draw another line of the same length on a second sheet of paper. Continue this for 20 trials.

c Hand the 21st sheet of paper to the partner to measure the line to the nearest 0.5 cm. Tell the subject the result. Then ask the subject to perform another 20 trials.

d Measure the lengths of the lines in both series; graph the results against trial number. Include both series on the same graph.

a Arrange the apparatus and the subject as shown in the diagram. The subject must be able to reach the sheet of paper around the dot, but not be able to see it. 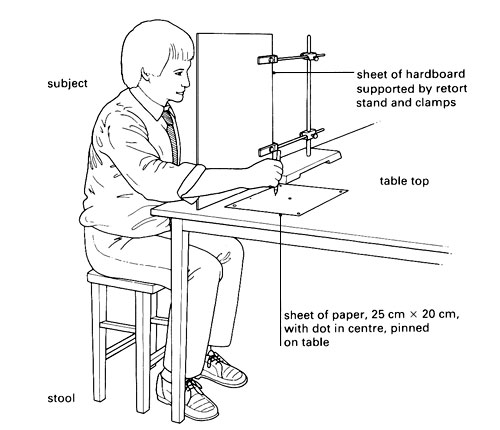 b Ask the subject to mark the paper as near to the dot as possible, without touching the bench. After each attempt, the partner should measure the distance between the dot and the pencil mark and record it, without informing the subject. Continue for 20 trials.

c Perform a second series of trials, but this time, inform the subject of the result of the previous trial – for example, 5 cm north-west of the dot.

d Plot the results of the two trials against the number of the trial on the same graph.

When we draw, we use a form of skill called sensorimotor. Our muscular control is altered by feedback through the sensory system. In mirror drawing, the normal co-ordination between hand and eye is confused and we have to learn a new pattern.

One description of learning is ‘an adaptive change in behaviour resulting from experience’. Discuss how this investigation of sensorimotor skills could give an insight into how each subject learns.

Motor control like this seems to be part of the work of the cerebellum. The cerebellum receives a large sensory input from the muscles, joints and tendons, but does not contribute to conscious sensation. It is of importance in making precise, smooth and rapid movements, in balance, and in the co-ordination of head and eye movements. When the cerebellum is injured, movement is possible, but clumsy and unco-ordinated.

During the First World War, many soldiers received head wounds which destroyed one side of the cerebellum, leaving the other intact. In the years after the war, some of these men helped to make a significant contribution to our knowledge of the effects of the loss of cerebellar function. One ex-soldier described an aspect of his disability as follows: “The movements of my left hand are done subconsciously, but I have to think out each movement of my right arm.” (Holmes, G., ‘The cerebellum of Man’, Brain, Volume 62, 1939, pp. 1-30.)

Task 2: here is a data set for use if required

All three subjects have improved on the task when you compare their first batch of 20 lines to their second batch of lines. The first subject has improved only a little as they were very close to the length from the start! The second subject drew his lines very consistently in each set, and the second set are closer to the 7.5. The third subject started out very close to the correct length, but without immediate feedback,= drifted away by quite a significant amount. After feedback, however, she corrected the error and managed a much more consistent second set. These subjects are adults which might make an interesting comparison with results from the students in your class.

Practice makes perfect? with questions and answers.
Download a