The vertebrate heart in action

To investigate the action of a working heart, and conduct experiments on it, needs an animal larger than Daphnia. Frogs were used in the past for such physiological work, because their tissues remain active for some time after the animal has been killed. It is possible to kill a frog in such a way as to leave its heart still functioning (this is called pithing). This is now an illegal practice in schools. This is an opportunity to discuss the ethical issues surrounding the use of frogs this way – both in the early research and later as an educational resource. Under the Animals (Scientific Procedures Act) 1986 this procedure now requires a licence from the Home Office. See http://www.homeoffice.gov.uk/science-research/animal-research/.

The student notes provide an outline of the procedure that would have been used. You could begin by discussing this to make sure they understand what was involved and debating the ethical issues surrounding the technique.

The student notes continue with example results and questions to focus attention on key concepts.

There is no need to set up any materials for this. However, if you still have a kymograph, a pivoting arm and a perspex bath you could set this up (without a frog) to give students a clearer sense of what the apparatus was like and what the activity involved.

There are no health and safety issues for this experiment because it is presented for discussion only – not as a protocol to be followed.

Attempting to repeat this investigation of the frog’s heart would raise more ethical issues than simply discussing it. However, there are issues to be considered if even looking at the results of this (or other) research which used methods that would today be questioned or rejected on ethical grounds.

Some questions to think about:

SAFETY: There are no health and safety issues for this experiment because it is presented for discussion only – not as a protocol to be followed.

a Explain to the class that the notes present the results of an experiment that used to be done regularly by students. For various reasons, we have decided not to repeat the experiment, but the method and the results are very interesting.

b Decide if you want to focus on the practical and the physiology first and ‘car park’ any ethical questions, or if you want to deal with the ethical issues first. [‘Car park’ involves noting any questions visibly (on a white board, or flip chart) to deal with later, rather than tackling them as they arise.]

c Present the notes, and discuss the physiological and ethical points raised.

Experiments using pithed frogs were a mainstay of experimental physiology for many years, and many features of the control of heart beat can readily be demonstrated with this protocol. Details of pithing are not included on the student sheet, but are given here so that you can more easily answer questions (should they arise) about the techniques. Under the Animals (Scientific Procedures Act) 1986 this procedure now requires a licence from the Home Office. Without such a licence (for the premises and the practitioner) this procedure would be illegal. See http://www.homeoffice.gov.uk/science-research/animal-research/.

Before pithing a frog, the animal is stunned by holding it by the legs, ventral side up and bringing the head down sharply against the edge of a bench. The stunned frog is held firmly in a cloth, dorsal side up, and the head is bent downwards. The point of a blunt seeker is slid back along the midline of the head until it slips into the depression of the foramen magnum. The point of the seeker is pressed firmly into this depression and forwards into the brain. It is pulled back with upward pressure to destroy the brain, but is not removed completely. It is turned round through 180° and is pressed back into the neural canal with an upward pressure as far as it can go. The frog is tested for reflexes by pinching each foot. If this fails to evoke a response, pithing has been successful. An animal without a central nervous system cannot feel pain. The appearance of a pithed frog is as acceptable to students as that of a living frog.

The student notes are divided into two main sections – the first deals with the effects of temperature on heart rate and the second deals with control and co-ordination. You could leave out the second section, or deal with it separately. Full answers to the questions are given in the student sheet document.
The student sheet includes reproductions of the results of the experiments, and also diagrams of the frog heart anatomy that may be useful to you. The latter are repeated here. 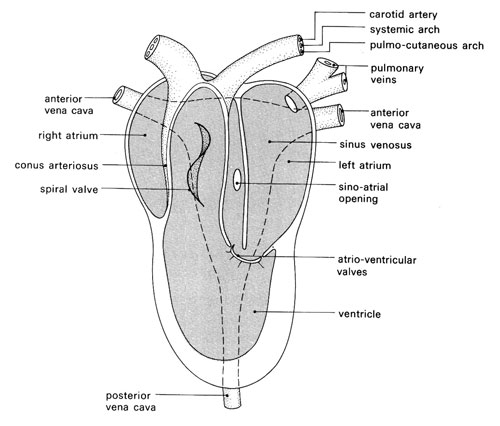 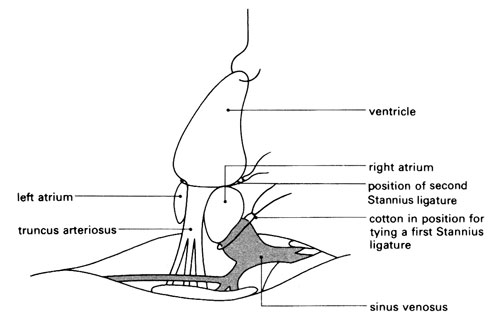 The vertebrate heart in action with questions and answers.

Observing the effects of exercise on the human body