Investigating factors affecting the breathing rate of a locust

All organisms depend heavily on their gaseous environment to supply them with oxygen and remove their waste carbon dioxide. This procedure explores the effect of a change in gaseous composition of the atmosphere on an organism’s breathing. Two hypotheses could explain the change in breathing rate:

This will depend on how many locusts you have to work with, and how many of your students are confident and willing to handle them calmly. You could set this up as a demonstration with a video camera and projector if you have access to suitable equipment. In this case, involve as many students as possible in each stage of the process and in collating and analysing the data.

Disinfectant for tubing that is breathed through, Milton (Note 4)

Stopclock or timer for 30-second intervals

Dispose of the short length of tubing you use to breathe into the syringe, or disinfect using Milton as described in Note 4.

1 Generating oxygen: For more details see CLEAPSS Laboratory handbook section 13.2.2 (pp 1309-1311). Add 20 vol hydrogen peroxide (refer to Hazcard 50 – ‘irritant’ so wear eye protection) through a separating funnel onto powdered manganese(IV) oxide (refer to Hazcard 60 – this powder is harmful by inhalation and if swallowed) in a flask fitted with a delivery tube. Lead the tube to an inverted gas jar full of water on a beehive stand, and collect the gas over water. Withdraw oxygen from the gas jar by means of a syringe attached to a 40 cm length of plastic tubing (Note 3). You can calculate how much oxygen you will get from hydrogen peroxide – 1 cm3 of 20 vol hydrogen peroxide will produce 20 cm3 of oxygen. Alternatively, you could use compressed gas in cylinders (Note 3).

2 Generating carbon dioxide: add 2M hydrochloric acid (refer to Hazcard 47A – this is an irritant, so wear eye protection) through a separating funnel onto an excess of marble chips in a flask fitted with a delivery tube. Lead the tube to an inverted gas jar full of water on a beehive stand, and collect the gas over water. Withdraw carbon dioxide from the gas jar by means of a syringe attached to a 40 cm length of plastic tubing (Note 3). 42 cm3 of 2M hydrochloric acid will generate 1 litre of carbon dioxide. Alternatively, you could use compressed gas in cylinders (Note 3).

3 Refer to the CLEAPSS Laboratory Handbook 'General equipment' section 9.9 for details of the advantages, disadvantages, equipment required, and risk control measures recommended for using gas (carbon dioxide, oxygen and others) supplied from cylinders. If using a cylinder, you need to open the cylinder valve very slowly to avoid blasting the locust with a rapid flow of gas.

4 Plastic tubing: you will need long sections for collecting oxygen or carbon dioxide in syringes and short (10 cm) lengths to breathe through into the syringe containing a locust. Once used to breathe through, tubes are contaminated with saliva and should be disinfected in a freshly-prepared solution of Milton by leaving for at least 30 minutes. Then rinse in water before storing.

5 Handling locusts: the technician, teacher or students must handle the locusts confidently and calmly to reduce stress to the locust and anxiety to the handler. Locusts do not move as quickly as some other familiar invertebrates such as crickets, but they can jump and fly about if not handled firmly.

The procedure involves handling a living locust, observing it closely while changing the atmosphere around it for a period of about 20 minutes, and then returning it to its cage. It requires students to handle the living organism calmly, confidently and carefully in order to cause it as little harm as possible and minimise any distress it might experience. The positive outcome of the procedure is that students can make direct observations of the effect of changing atmosphere on this animal’s breathing.

a Set up the oxygen and carbon dioxide generators. Collect one or two gas jars of each gas; discard the first gas jar generated as it is likely to contain mostly the air flushed through the apparatus.

b Place a living locust in a 20 cm3 clear plastic syringe as shown in the diagram. Insert the piston and push it in gently so that the locust has no room to move. Do not squash the animal.

c Count the number of pumping movements of the abdomen occurring in 30 seconds. Record the results of three such counts.

d Attach a piece of plastic tubing to the syringe nozzle. Remove the piston and replace it with a loose plug of cotton wool. Exhale gently through the tube for 10 to 15 seconds, so that your exhaled air goes into the syringe barrel, but you inhale from your surroundings. Remove the cotton wool and replace the piston. Count the locust’s breathing rate for three successive periods of 30 seconds.

e Move the piston to and fro about ten times to replace the exhaled air with laboratory air. Allow the locust time to acclimatize to atmospheric air. (If its breathing rate returns to the original rate it has acclimatized.)

f Remove the piston and put back the cotton wool plug. Pass pure oxygen gently into the syringe barrel for 10 to 15 seconds. (Note 1.) Then replace the piston and push it as close to the locust as possible without crushing it at all. Record the breathing movements of the animal for three periods of 30 seconds.

g Prepare a 20 cm3 syringe with a short extension tube on its nozzle and fill with carbon dioxide. (Note 2.)

i Record breathing movements for three further periods of 30 seconds.

j Add another 1 cm3 of carbon dioxide to the locust’s atmosphere, and record the breathing rate.

l Return the locust to its cage.

m Tabulate your records to show mean breathing rates for each part of the investigation.

n Calculate as accurately as possible the volume of the atmosphere surrounding the locust. Assume that the locust has a volume of 4 cm3.

Breathing, ventilation and respiration are all words used to describe the physical process of moving air in and out of a body. Respiration is a particularly confusing term for biology students, because it often refers to the cellular level processes releasing energy from food. Yet the phrase 'articifial respiration' remains the common way of describing how we 'breathe' for someone who is not breathing, in order to ventilate their lungs. It is worth explaining the difference between the common and biological uses of these terms.

Students will have experienced the effect that a stuffy room has on their alertness, and may also be aware of how that environment affects their breathing pattern.

The first investigation is of the change in a locust’s breathing rate if atmospheric air is replaced with exhaled air.

Sample data here show you the kind of results you can expect. 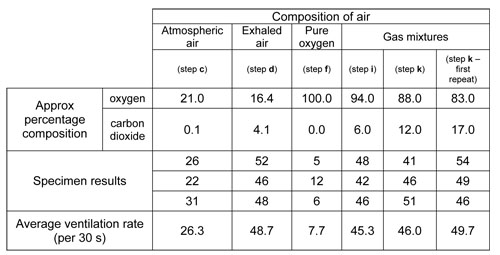 This data set is included in a second spreadsheet

Ventilation rate and gas composition.xls (16 KB). You and your students could use this to generate graphs of ventilation rate against concentrations of oxygen and carbon dioxide.

Investigating factors affecting the breathing rate of a locust (90KB) with questions and answers.
Download spreadsheet

Another practical on this site gives detailed instructions for an exploration of the ventilation system of a dissected locust.

Dissection of the ventilation system of a locust