The movement of blood in the limbs of the small freshwater crustacean Asellus – the water louse – can be clearly seen with a low-power microscope. Capturing and mounting the crustacean should allow your students to make good observations of fluid moving in the limb quite quickly.

The second part of the activity involves displacing the abdominal plates (pleopods) and making observations of water flow over the pleopod and particle flow within it. This will allow your students to make hypotheses about the function of this structure.

This activity involves handling aquatic animals collected in advance from a suitable pond. Students may therefore have some contact with pond water which can carry infectious diseases, so take any necessary hygiene precautions.

Organising the groups will depend on the availability of microscopes and of Asellus. You could set this up as a demonstration (with students handling Asellus under teacher/ technician guidance) if you have access to microscopes with a suitable video feed and suitable projector.

The time taken for the procedure will largely depend on the detail with which you require observations to be made, and the detail of your discussion with your students.

2 Use soft plastic pipettes with an inside bore of 3-5 mm and with the pointed end cut off. This should be wide enough for Asellus to enter when sucked up.

3 Students may find it difficult to displace one of the abdominal plates (pleopods) without crushing the animal. It is better to try another specimen than to persevere to the point of damaging the water louse. In some specimens it does not need to be displaced, but will be visible as a separate, fluttering structure, dorsal to the last walking leg and ventral to the uropods. If the moving blood stops, this is a sure sign that too much pressure has been applied and the animal is not likely to recover.

Teachers should be careful to introduce these animals in a way that promotes a good ethical attitude towards them and not a simply instrumental one. Although they are simple organisms that may not 'suffer' in the same way as higher animals, they still deserve respect. Animals should be returned promptly to the holding tank or their natural environment after being examined. This supports ethical approaches that are appropriate to all field work, where animals are returned to their habitat after observations have been made.

a Take very small pieces of Plasticine and roll them between finger and thumb to make two slender cones, 4-5 mm high and with a base of 3 mm diameter. Place near one end of a clean slide. At the other end of the slide place a small lump of Plasticine.

b Select a young water louse (Asellus), preferably 5-7 mm long and pale in colour, Mount it on its back in water in the middle of the slide. Carefully place another slide over the animal, supported on the Plasticine cones and prevented from slipping by the other piece of Plasticine as in the diagram.

c Very gently press down the upper slide (without leaving a finger print over the animal) until the Asellus is trapped but not squashed. Examine it under a microscope.

d Observe the penultimate limb under low power. Focus within the limb and search for movement of materials inside it.

e Make a labelled sketch showing the limb and the path taken by moving particles within it.

f Place a second Asellus in a test-tube or specimen tube of water. Look at it from one side, using a hand lens and observe its posterior end carefully.

g Return to the first Asellus and view the posterior part of its body under low power. Look for a thin colourless structure protruding beyond the skeletal plates on one side of the body or the other. 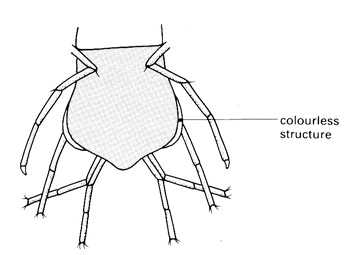 h If no fluttering structure is visible, very gently and carefully increase the pressure on the animal and look again. If still unsuccessful, try another water louse (Note 3).

i When a colourless structure appears, focus inside it and observe.

j Return the animals to their natural environment as soon as possible.

In the displaced abdominal plates (pleopods) of Asellus you will be able to see haemolymph (the blood of Crustacea), a colourless fluid consisting of plasma and amoeboid leucocytes. The plasma contains haemocyanin, a copper-containing compound which is bluish when oxygenated and colourless when deoxygenated.

What to look for:

The path of particles moving in both directions along the limb There are usually at least two streams moving in opposite directions. Sometimes there are two streams flowing into a limb and one back into the body or vice versa (see diagram above).

The speed of movement of the particles The movement is irregular or pulsatile.

Evidence of blood vessels in places the appendages seem to be full of moving fluid (blood) and there must be partitions of some sort, allowing a two-way flow, but the partitions themselves are invisible. The animals contains blood spaces known collectively as the haemocoel in which most of the haemolymph (blood) is found. Short, distributing arteries (that contain valves) run from the heart to major organs – but you will not see these vessels.

Appearance of the pleopod The cuticle covering the pleopod might be thinner or less heavily sclerotized than the rest of the body covering which would explain why it is colourless.

Movement of particles in the pleopod Particles (cells) are visible, moving in the pleopods. The direction of movement is generally from the posterior to the anterior end of the animal. Blood moves in one direction while water is continually propelled past the pleopods in the opposite direction. This suggests that a counterflow system is present, which would maintain a steep diffusion gradient for solutes between the water and the haemolymph in the pleopods.

Possible function of the pleopod The pleopods are seen to flutter as water is moved backwards (in a posterior direction) over the posterior parts of the body. The pleopods have a large surface area and, probably, thin walls. This, with the counterflow of water and blood described above would indicate that pleopods could be responsible for the uptake of oxygen. However, a thick cuticle does not necessarily reduce gas exchange significantly and these organisms probably use their whole body surface for gas exchange, with the pleopods increasing surface area and helping to maintain water flow over the whole surface.

Looking at a heart
Elastic recoil in arteries and veins