This activity presents the steps scientists follow in studying animal behaviour, or ethology. Ethology begins with observation of animals engaged in behaviour, then formulates descriptions of the animals’ actions. These actions are considered in terms of their consequences for the animal, such as its well-being, survival and reproductive success, and also in terms of how they come to happen – are they instinctive and automatic actions or learned and deliberate?.

Presenting video resources and giving time for discussion can take as long a time as you think is worthwhile – certainly up to a whole lesson.

Planning a further investigation could also take up to one lesson. Carrying through the investigation is an open-ended task that will depend on student commitment and the perceived value of the task.

Series of video sequences of animal behaviour to observe (Note 1)

If working outdoors during the investigation, avoid trip and slip hazards, unhygienic substances and thorny plants.

1 Visit www.ARKive.org to view videos of animals in action. Collate a scrapbook of the video sequences you would like to show. Try to cover species from across the animal kingdom, showing different behaviours. Suggestions are: Leaf-cutter ant defence behaviours, Small garden bumblebee feeding, Atlantic herring (moving in shoal), Common frog (croaking and moving in a group), Western diamond-backed rattlesnake (using rattle as warning and also hunting), Male blackbirds singing, Male blackbird feeding chicks, Female cheetah teaching cubs to hunt, Bonobo making a treetop nest, Eastern chimpanzee feeding (exhibiting tool use). If you cannot make use of the playlist of videos offered here, you could collate your own playlist from any natural history DVDs available to you.

There are no ethical issues involved in a process involving observation of animals carrying out their natural or normal behaviours. This procedure is not suggesting that animals (even invertebrates) should be collected or disturbed for the purposes of observation.

SAFETY: There are no safety issues with the video-based lesson. During the investigation, ensure that students will be observing familiar animals in familiar environments. If observing outdoors, ensure students take precautions to avoid trip and slip hazards, unhygienic substances and thorny plants. 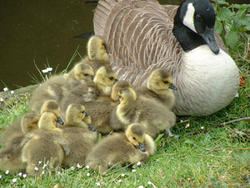 a Present images/ video clips of animals doing different things. Include animals from a range of species – insects such as bees, flies or butterflies, worms, molluscs, fish, amphibians, birds, reptiles, mammals perhaps including pets such as cats and dogs (Note 1).

b Ask students to describe what one of the animals is doing, in as much detail as possible. This means going further than ‘it’s eating something’ to for example ‘the bee has landed on a flower, and is probing the flower with its proboscis’.

c Ask students to try to explain why the animal is doing what it is doing. For example, ‘the bee is taking nectar and/or pollen from the flower for food’.

e If the students have not given you answers in each category, give them an example to discuss in more detail.

g Choose an animal you can readily observe. This may be a family pet, or a garden bird or insect.

h Pick a time of day or an activity, such as feeding time, when you will observe the animal’s behaviour closely for a few days.

i Over a fixed time period (around 10-15 minutes), observe and record the different ways the animal behaves: how does it move, how does it hold its body, does it make any noise, and so on.

j Speculate on the consequences of the behaviours for the animal in terms of its health, chances of survival, and reproductive success.

k Decide whether you think the behaviours are instinctive and automatic, or learned and deliberate, or whether you cannot decide. Explain your thinking.

Studying animal behaviour involves a series of activities. The first step is observation – finding out what behaviours happen and in what circumstances, and noting the outcomes of different behaviours. A formal study would involve detailed observation and recording in the field, or possibly in a controlled space such as a laboratory or zoological pen. Recording could involve making sketches, taking photographs or video, and making verbal notes. Analysis of patterns of behaviour could be simple or involve complex statistical work or mathematical modelling.

Identifying how behaviours are controlled could involve presenting various stimuli to see how reactions change. There are examples in biological literature of this approach in the work on aggressive behaviour in male sticklebacks, and in Tinbergen’s work with on pecking behaviours of gull chicks. With very young and newborn animals, it is usually accepted that most observed behaviours are instinctive. With older individuals it is harder to be sure whether a behaviour is instinctive or learned, unless you can track changing behaviour through a lifetime and correlate the changes with experiences. A change of response to stimulus may change with age without learning being involved.

Identifying the effect and advantage of behaviours can also be complicated. It may require a study of population dynamics, and consideration of the relationships between individuals. Good starting points are to consider the effect of the behaviour on likely survival, chances of effective reproduction, energy expenditure and health of the individual. If it is hard to see the value for the individual, it is worth looking at a larger group to identify a value for a related set of individuals.
Studying similar behaviours in related species could provide clues about evolutionary relationships between groups, and about selective advantages of those behaviours.

For students beginning web searches to learn about animal behaviour and how it has been studied, useful names to search for include the following: Nikolaas Tinbergen, Konrad Lorenz, Karl von Frisch, Jane Goodall, Dian Fossey, EO Wilson.

http://asab.nottingham.ac.uk
The Association for the Study of Animal Behaviour provides information and suggestions for practical work and other studies of animal behaviour from KS2 to A-level. For how to get the videos and photographs below see the ASAB website.

'Vigilance behaviour in barnacle geese' is a video practical showing the behaviour of barnacle geese in flocks of different sizes. It includes a series of videos of the geese with full notes on what to look for, how to record your observations and analyse the results.

'Changes in plumage in Canada geese goslings' is a photographic resource showing Canada geese at different stages of their life. The notes explain that, when recording behaviours in a population, it may be important to identify the age of the individuals involved. The photographs allow students to practise identifying the age of goslings from feature of their plumage, and then to use classify observations of behaviour according to the age of the geese. Part of this resource involves a mathematical process to measure the accuracy with which students or other observers have assigned pictures of goslings to the stages of growth. Simpler diagrams of sandwich tern behaviours at the end of the resource could be used with younger students. The pictures of Canada geese and goslings reproduced here are taken with permission from this resource.

www.arkive.org
Arkive is a collection of films and photographs of the world’s species in a centralised digital library. It is a Wildscreen initiative. Wildscreen’s mission is to promote the public understanding and appreciation of the world’s biodiversity and the need for its conservation through the power of imagery. It is already a huge resource of still images and video clips. A ‘scrapbook’ allows you to make an easy index of a series of videos to view in a lesson. This scrapbook was made by the resource developer as an example of the range of animal behaviour you could show.  See this page on the Arkive website.