Investigating the response of Calliphora larvae to light

This investigation studies the response of an animal to light. Calliphora larvae, the maggots of the blowfly (bluebottle) are convenient animals to use, but you could try other invertebrates. The procedure offers opportunities to discuss how to minimise the effects of variables other than light, and the number of repeats required to draw meaningful conclusions about Calliphora behaviour.

Check local suppliers for a source of larvae well in advance. Keep the larvae in a box with a tight-fitting lid that allows air to circulate.

Discuss the procedure in advance, to enable students to consider what variables need to be controlled in the laboratory, how many larvae to investigate in each situation, how many times to observe each larva’s behaviour, and how to analyse and present the results of the investigation.

Felt pen that will write on glass, or wax pencil

Solvent if necessary, and cloth to wipe glass clean

Plastic forceps to handle the larvae

Tracing paper to copy the pattern of larval paths, or digital cameras if appropriate

Laboratory that can be ‘blacked out’

Calliphora larvae or other maggots (Note 1)

Use good hygiene procedures when handling Calliphora larvae (Note 3).
Reduce the risk of cuts from glass sheets by binding the edges with suitable tape.
Take care when tightening the clamp on the glass sheet – do not apply too much pressure! 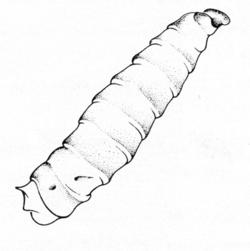 1 Fully grown larvae just before pupation are the most suitable for this investigation. Calliphora includes bluebottles, whose maggots are available from fishing tackle shops as ‘gentles’. Other species, such as Musca domestica (housefly) and Lucila sericata (greenbottle), also have maggot-like larvae whose responses you could investigate. Calliphora larvae can be handled directly, but you can use plastic forceps to hold them firmly without squashing if students or staff are nervous or squeamish.

2 Ray boxes are the most suitable sources of light, but normal bench lamps will do as an alternative.

Handle the larvae with care. Treat invertebrates as humanely as other animals, though there is no legal obligation to do so. Do not leave specimens used in practicals to starve or dehydrate. Keep and care for the Calliphora larvae properly, and kill them humanely only as a last resort. Avoid undue stress during the investigations. Students may have pets (lizards or snakes) that will eat the larvae at the end of the investigation.

SAFETY:
Handle the glass sheet with care. Avoid touching lamps that may be hot. Observe good hygiene procedures during and after handling the larvae.

Preparation
a Take a piece of black card or paper about 30 cm square; fix it to the bench with tape, making it as flat as possible. Use two clamp stands and clamps to support a sheet of glass horizontally about 5 cm above the card.

b Place one lamp above the edge of the card, halfway along one side. Place a second lamp on an adjacent side of the card, to make a beam at 90° to the first. Ensure that the bulbs are of the same intensity. Test with a light meter if necessary. Draw a faint mark on the card to indicate the positions of the beams of the lamps.

c Dim the laboratory. Set up barriers to cut out the light from other sets of apparatus.

d Ensure that the experimental lamp is the only lamp which will influence the larvae in your investigation.

f Release a single larva near the centre of the card. Follow its movements by marking the glass with a suitable felt pen or wax pencil every few seconds.

g Repeat each investigation several times with the same individual, starting with it pointing in a different direction each time. (You will work out which is the ‘front end’ after the first investigation.)

h Collect the data from each investigation by tracing the maps onto paper, or photographing the glass if you can.

i Clean the marks from the glass before repeating with other individuals.

j Investigate the response of larvae to a single lamp on one edge of the card.

k You could also investigate the response of the larvae to the second lamp:

l Return the larvae to their holding dish.

m With a ruler and protractor, measure the angles of the animals’ paths in relation to the beams.

Animals usually behave in a predictable way in response to a stimulus in their surroundings. However, sometimes the pattern of behaviour changes. For instance, young blowfly larvae usually crawl towards light, but this behaviour changes a few days before they pupate – then they will crawl away from light. In the last larval stage, the animal burrows into the ground before pupation. The photonegative response has a survival value: it increases the likelihood that the larva will reach a suitable environment. At any stage, a photonegative response makes the larvae more likely to burrow into their food (such as a carcass) which reduces the risk of desiccation and predation at the surface.

The larvae’s response should be clearly directional, in contrast to that of woodlice or Tribolium to humidity (see Using a choice chamber to investigate animal responses to stimuli). The response should be photonegative, but this may depend on the maturity of the larvae. The larvae should change direction by 90° to move away from the source of the second beam, and should follow a path at 45° to the direction of the first beam when both lamps are on if they are of equal intensity. 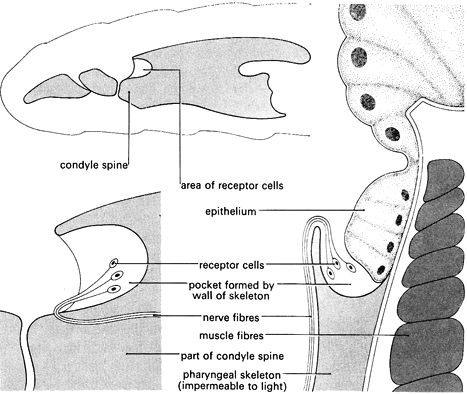 The light receptor of Calliphora larvae consists of a simple system. In fully developed larvae, the receptors consist of a number of light-sensitive cells with nerves attached. See the diagram above. These are situated in a pocket on either side of a thickened structure (the cephalo-pharyngeal skeleton) which forms the walls of a sucking pump used in feeding.

N Bolwig's experiments (1946) identified the light sensors by a series of operations on the larvae – removing parts of the anterior end of the animal and then testing its reactions to light. He found that removal of the maxillary lobes left the larvae unaffected in their responses to light, but that larvae with injuries to part of the cephalo-pharyngeal skeleton were unable to react. 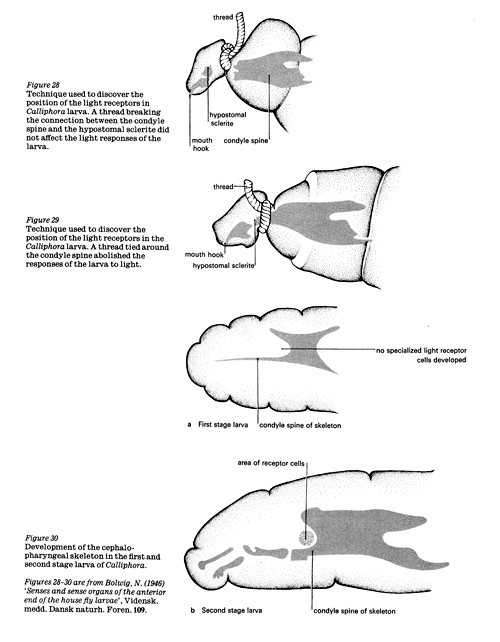 Investigators tied string around the larvae, pressing hard on the cephalo-pharyngeal skeleton without breaking it. Larvae in this condition were unable to react to light until the string was removed.

By cutting different parts of the skeleton, they found that one small area was essential for the normal response to light – a portion extending backwards from the dorsal edge of the condyle spine. A histological examination of this area showed a nerve in the region which came from a pocket at the anterior edge of the cephalo-pharyngeal skeleton. This nerve was cut by micromanipulation which abolished the response to light in all larvae so treated. Careful examination of sections of the pocket highlighted a little cluster of egg-shaped cells which gave off a fibre to the nerve. These were assumed to be the receptor cells.

When exposed to one source of light, the first instar is unable to orientate successfully away from the stimulus. At this stage, the light-sensitive cells do not appear to be fully developed. In the second and third instars, the larvae are able to orientate fully to one light. In the second stage, the shadow of the body seems to be important as the cephalo-pharyngeal skeleton is not yet well developed.

When exposed to two lights place opposite one another, the second stage larvae are unable to orientate successfully, whereas the third stage turned at right angles to the light beams. Due to further development of the skeleton, by the third instar the light sensitive cells are placed in a pocket which means that light cannot enter from the side. Movements of the animal are explained as making sure that its orientation is such that light receptor are exposed to minimal stimulation. 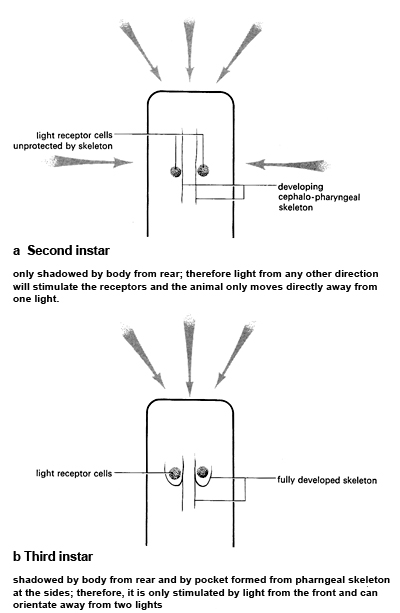 When the larvae respond to a light source, every so often the anterior end deviates alternately to the right and to the left. This is particularly noticeable when it is first exposed to a light. This suggests that the larva may be comparing and ‘summing up’ the intensity of the stimulus on either side (klinotaxis).

In this type of taxis, regular deviations of the body are made which allow a comparison of stimulation on either side of the animal. By this means, the stimulation of the receptor can be compared in time and space. For example, if the body deviates to the left, then, as a result, the receptor may be stimulated less than before. By a continuation of this process, a tactic movement can be made, although receptors are not present to locate the direction of a stimulus by a direct means. The diagram below suggests an exploration on these lines of the orientation to two light beams. The grey arrows show the direction of the light beams and the black arrows show the movement of the larva. 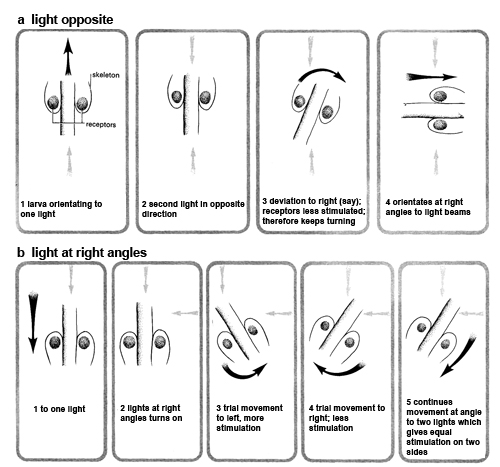 The hypothesis that a klinotactic mechanism is involved was tested by D L Gunn (1961) by the following technique. Two lights (one dim, one bright) were arranged over a sheet of wet ground glass. The dim light was left on, and a dark-adapted larva placed on the centre of the glass. The other light, controlled by a bell-push, was switched on momentarily every time the anterior end of the larva turned to the left. This resulted in the larva swinging around and moving to the right (or vice versa). This shows clearly that the larva is not responding to the direction of the light. The mechanism is explained if the larva is making a comparison in time. When the larva turned to the left and the light was switched on, the receptor was more stimulated than when it turned to the right; as a result the animal turned towards the least stimulated side.

Investigating the response of Calliphora larvae to light (207 KB).with questions and answers.

Using a choice chamber to investigate animal responses to stimuli