Using a choice chamber to investigate animal responses to stimuli

These notes explain how a choice chamber is set up, and how to use one to provide adjacent environments with different environmental conditions. You can then introduce small invertebrate organisms into the chamber, at different starting points, observe their movements, and record their distribution after a fixed time.

Use a test such as the X2 significance test to establish whether the final result is significantly different from the expected distribution. If so, the null hypothesis is disproved. You can state that woodlice do have a preference for one set of conditions over another.

Animal behaviours in choice chambers may show directional responses (movement directly towards or away from particular stimuli), or may show behaviours such as increasing speed and increase in turning rate. These may result in overall movement out of one area into another. If the adjacent area is preferred, the animal reacts by reducing speed of movement and turning rate so it is more likely to stay in the preferred conditions.

Demonstrate how to set up the choice chamber and how to introduce invertebrates to it.

Students practise manipulating the apparatus and handling the invertebrates appropriately. Ask students to develop a hypothesis to test – relating to damp/dry conditions, light/dark conditions or the presence/absence of another manageable substance (such as the animal’s main foodstuff).

Run the investigation and collect the data. Explain the statistical test and analyse the data, possibly in the next lesson.

Sample of food for the invertebrate (optional)

Beaker, 100 cm3 (or specimen tube or Petri dish) to collect woodlice or other small invertebrates

Pooter if available, with disposable or sterilisable mouthpiece

Artist's brush, small with soft bristles, to manipulate the invertebrates

Examples of invertebrates (Notes 1 and 2)

Handle desiccants with awareness of hazards. If using a pooter, ensure that the mouthpiece has been disinfected and that used mouthpieces are disposed of or disinfected fully before re-use. Follow good hygiene procedures during and after handling invertebrates (Note 6).

1 Tribolium: Tribolium is a small flour beetle that attacks cereals and cereal products and is a pest of stored food. Tribolium confusum is probably the most common flour beetle in mills and bakeries. Tribolium castaneum (the red rust flour beetle) is commonly used in the laboratory. It needs a higher temperature to complete its lifecycle than T. confusum and is therefore not such an important pest in temperate climates. Either species of Tribolium is suitable for these investigations. You can rear them easily in a jar of wholemeal flour. Sieve the beetles from the flour before the investigation starts. Distribute beetles in Petri dishes or specimen tubes. Collect and transfer them using pooters or small artists brushes.

2 Woodlice: the CLEAPSS Guide L56 'Housing and keeping animals' gives the following information about woodlice. They survive in any reasonably-sized container such as an old aquarium or trough full of moist soil and leaf litter. Keep the container covered to exclude light and retain moisture. Place it in a relatively cool and sheltered place out of direct sunlight.

Keep the soil moist but not waterlogged. Put a variety of stones, bark and rotting wood on the soil for the woodlice to live in. If kept outdoors, such an environment will often be colonised by woodlice naturally. If this does not happen, or the animals are intended for use in choice-chamber work, it is worth ‘seeding’ it with individuals of the same species – the animals should look the same! Then bring the container and contents indoors to prevent further colonisation.

Add food at intervals: plant material such as potato, carrot and other root vegetables cut up into medium-sized pieces. Add a lump of cuttlefish or chalk (natural, not blackboard chalk) to the soil to provide a supply of calcium carbonate.

Where your school has an environmental area, placing pieces of wood, bark or stone on the soil will encourage colonisation by woodlice. This will provide a source of material for observation as well as extending the range of microhabitats in the area.

If you do not maintain a colony of woodlice in the laboratory, collect woodlice from an outdoor environment, keep for a short period and return them to their source as soon as possible. They are not well adapted to a warm, dry atmosphere and must be kept moist and in a cool position, preferably in the dark. Woodlice that have been kept in very moist conditions may be under no water stress, and may not show clear preference for damp over dry conditions in a choice chamber. Keep the woodlice to be used for the investigation in drier conditions for the 24 hours immediately beforehand. 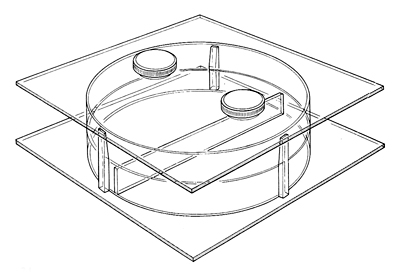 3 Choice chambers: Perspex choice chambers are available from Griffin Education, priced around £50, and many schools will have them. A choice chamber allows you to change conditions in different parts of a container while keeping the animals under investigation out of direct contact with any chemicals used. Any large dish, divided into segments, with some fine nylon mesh as a platform and a cover to enclose the internal atmosphere will do. A stoppered hole in the centre of the cover is best for introducing organisms to the chamber. If you need to lift the lid, you just have to wait a little longer for a new equilibrium to establish. You can make small choice chambers with small Petri dishes.

4 Desiccant: Anhydrous calcium chloride (see CLEAPSS Hazcard) is an IRRITANT and gets hot when water is added: it can even cause water to boil. Minimise dust, avoid skin contact, and wash off hands in plenty of running water if necessary. Blue, moisture-indicating silica gel impregnated with cobalt(II)chloride (see CLEAPSS Hazcard) is TOXIC; the Hazcard suggests wearing gloves when handling large amounts, and avoiding any dust. Silica gel does not dehydrate an atmosphere as quickly as calcium chloride, but is less hazardous to manage in small quantities.

5 If you prefer, you could tape a sheet of clear plastic or glass to the top of the choice chamber and make marks on that – cleaning it between investigations.

Teachers should be careful to introduce invertebrates used in this investigation in a way that promotes a good ethical attitude towards them and not a simply instrumental one. Although they are simple organisms which may not 'suffer' in the same way as higher animals, they still deserve respect. Animals should be returned promptly to their natural environment or a suitable holding tank after exposure to the choice chamber. This supports ethical approaches in field work, where animals are returned to their habitat after observations have been made.

Observe good hygiene procedures when handling invertebrates: do not eat or drink in the lab, wash hands with soap and water before leaving the lab, and cover any cuts or wounds. If using a pooter, ensure tht the mouthpiece has been disinfected, and that used mouthpieces are either disinfected before re-use or disposed of.

a Setting up a choice chamber: Place any chemicals or materials required to generate a condition gradient in the bottom layer of the chamber – for example, water on one side, desiccant on the other. Place the permeable platform on the bottom layer. Place the lid or cover on top of the platform. Leave to equilibrate if possible before introducing invertebrates. Introduce invertebrates through a hole in the centre of the lid or cover if possible, or in a way that does not favour one end of a condition gradient.

b How do groups of Tribolium or woodlice respond to a humidity gradient?

c How do individual Tribolium or woodlice respond to humidity?

As well as Tribolium and woodlice, you could use Calliphora larvae or other invertebrates in a choice chamber.

Tribolium usually show a preference for the dry environment. However, the previous environment may affect the physiological state of the animals and influence their reaction in the choice chamber. For example, beetles that have been slightly desiccated show a preference for higher humidity. This could be a subject for further investigation. The beetles move faster in the more humid environment; this will increase their chances of entering a less humid area, where they will slow down and tend to remain. An increased rate of turning on entering a humid environment would increase an animal’s chance of re-entering a drier area. However, the results of these observations may be inconclusive, because the beetles’ movements are restricted by the sides of the chamber which force turns. The beetles should move in random directions.

A directional response to stimuli is called a 'taxis' (for example phototaxis, or a phototactic response). A non-directional response is called a 'kinesis' (for example orthokinesis). In orthokinetic responses, the rate of movement depends on the intensity of the stimulus. In klinokinetic responses, the frequency of turning depends on the intensity of the stimulus. Positive responses result in movement towards a stimulus; positive thigmokinesis describes observed behaviour of woodlice – they move less when in contact with a surface above or below their body. As a result of this behaviour, woodlice tend to accumulate in crevices, between leaves or blades of grass, and under stones or fallen wood. (This means that woodlice may also accumulate in a cluster in the choice chamber, or near an edge even if conditions are apparently dry and light.) Negative responses result in movement away from a stimulus; for instance, negative phototaxis would be the common response of Calliphora larvae (maggots) to light.

When using a choice chamber, it is important to disturb the animals gently between trials to ensure that subsequent recordings are ‘new’ readings. It is also important to repeat each investigation at least once with the choice chamber rotated through 180°. This compensates for any effect of gravity if the chamber is on a slight slope.

Using a choice chamber (62 KB) with questions and answers.

Investigating the response of Calliphora larvae to light

http://asab.nottingham.ac.uk/index.php
The Association for the Study of Animal Behaviour provides information and suggestions for practical work and other studies of animal behaviour from KS2 to A-level.