Artemia salina (brine shrimps – commonly known as 'sea monkeys') kept in a brightly-illuminated aquarium provide an easily-observed and sustainable ecosystem for classroom-based ecological and behavioural studies by students at Key Stages 3 and 4 or Scottish Stages S1–S4 (Dockery and Tomkins, 2000).

The observable behaviours of brine shrimps allow students to investigate the phenomenon of sexual selection. Students will see the brine shrimps swimming and quickly distinguish between the sexes because mature animals swim together, in pairs, one male and one female. The females may choose the males they pair with. Once paired the males and females stay clasped together. A clasped pair may have mated or be yet to mate, but the clasping behaviour means the males guard the females, preventing other matings.

Begin by observing the shrimps, as Darwin and other naturalists would have done. Lead a discussion of methods of investigating the phenomenon of mate-guarding which will generate hypotheses for students to test – such as ‘larger females pair with larger males’. Test the hypotheses in subsequent lessons.

There are opportunities here for students to work in groups, with each taking a different role in the team. Collecting the data in a spreadsheet and generating different kinds of plot to search for relationships allows development of ICT skills. Completing the investigation could include communicating their results and conclusions to the class and evaluating their method and findings.

Beakers, 100 cm3 to hold shrimps withdrawn from the aquarium (Note 5)

1 Aquarium  Use a very clean plastic or glass vessel for your aquarium. An open tank of 1-5 litres is fine. Cover the bottom of the container with a layer of sand or limestone (oyster shell grit from pet stores is quite suitable) to provide a surface on which microorganisms can flourish. Fill the aquarium with water containing salt at a concentration of 30 g dm–3. Use plain sea salt (solar salt) or ‘Artemia salt’ from an aquarium store. The latter includes minerals and algae that help newly-hatched shrimp to thrive. It may also contain microorganisms which contribute to starting off a more natural ecosystem for the shrimp. Iodine and anti-coagulants in table salt are bad for the shrimps! Use bottled mineral water, or de-ionised water, or tap water that has been left to rest for 48-72 hours to allow the chlorine to escape from it.

2 Hatch eggs of Artemia salina  in a Petri dish containing a little of the salt water from the aquarium, ideally at 25 °C, but no cooler than 20 °C. After hatching, transfer the Artemia to the larger aquarium (note 1). The shrimp will grow if the aquarium is placed on a warm well-lit windowsill. The lower the temperature, the longer Artemia will take to hatch. At 26-28 °C a nauplius hatches within 24-48 hours, gets pubescent in 8-14 days, and lives up to 5 weeks, depending on the concentration of salt. The more salt, the shorter the life expectancy. You don't need to illuminate your aquarium constantly. 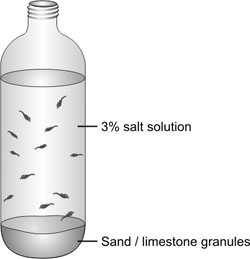 3 Feeding  In an open aquarium, when the population density of brine shrimps is low, there is abundant food and you will see a definite green colour in the water. The shrimp population will increase until competition for food (the green colour of the water disappears) halts further expansion.

If you want to encourage larger populations for this investigation, feed with algae powder from aquarium suppliers once a week. Add algae only if the water is very clear, and do not feed too much! If the water gets cloudy and green, there is too much food.

After some time you may see some white/ yellow fluffy stuff at the bottom of the aquarium. This is a brown diatom, which Artemia can and will eat. If it gets plentiful, you're probably feeding too much. Diatoms produce oxygen, so it's positively useful in the aquarium at low levels.

You can keep Artemia in a closed drinks bottle aquarium (see diagram). An aquarium like this can develop into a self-supporting, closed ecosystem. The brine shrimps should never need feeding and should never run out of oxygen, because the algae on which they feed carry out photosynthesis, grow and multiply by asexual reproduction. The algae never run out of carbon dioxide, water or mineral salts because they are recycled. Microorganisms in the water cause decay of dead algae, dead shrimps, shrimp droppings and dead microorganisms. Stir the substrate and water from time to time to mix in the nutrients from decayed organisms.

4 Changing the water: with an open tank, replace some water (about 20%) every two weeks or so to keep ammonia, ammonium, nitrite and nitrate ion levels low, so that hazardous bacterial populations have no chance to develop and do harm to the Artemia.

5 Catching shrimps: use a sieve with a mesh of 2-3 mm such as a tea strainer – this will catch only adults. Use soft plastic pipettes with an inside bore of 3-5 mm with the pointed end cut off. This should be wide enough for adult shrimp to enter when sucked up. The animals are robust in water and should not be handled outside this medium, but should not be distressed by drawing into a pipette like this. Return the animals to their tank after 5 minutes.

6 Observing and measuring shrimps: water has a high surface tension and will restrain the shrimp in the water drop. Any detergent on the slide (or in the water) will prevent the blob from forming. Photocopy a sheet of graph paper, with millimetre squares, onto an overhead transparency acetate sheet. A piece of this on or under your glass slide will provide a measure ideal for shrimp observations with a hand lens (x10) or a microscope on low power (x40).

Teachers should be careful to introduce these animals in a way that promotes a good ethical attitude towards them and not a simply instrumental one. Although they are simple organisms which may not 'suffer' in the same way as higher animals, they still deserve respect. This would be particularly true of any experiments establishing the limits of parameters favoured by the shrimps. Animals should be returned promptly to the holding tank after being examined. This supports ethical approaches for field work where pond animals are returned to their habitat after observations have been made.

SAFETY: Ask students to wash their hands after handling the aquarium water.

a Set up a population of brine shrimps in a salt water aquarium about 4 weeks before the investigation begins.

b Spend part of one lesson observing the behaviour of the brine shrimps as an introduction to developing hypotheses.

c Practice catching and measuring the shrimps for the rest of the lesson.

d Remove shrimps from the aquarium by fishing them out with a fine sieve. Don’t let them dry up in the sieve. Lower them into a small beaker of aquarium water and allow them to swim free.

e Pick up the shrimps from this water using a pipette that is wide enough for adult shrimp to enter when sucked up.

f Return the animals to their tank after 5 minutes.

g Take a clean glass slide and gently rub it dry and shiny. Put just a few drops of water with a shrimp onto the slide from the pipette (above). Suck up any excess water so that the shrimp is confined in a blob of water (note 6).

h Add one drop of water every minute or two, so that the shrimp does not dry out.

i Use a hand lens (magnification x10) or a microscope on low power (x40) to observe the shrimps and measure them against a scale (note 6).

j Students will have developed their own hypotheses to investigate. They could investigate pair choice by providing shrimps of different sexes with a choice of mate of different sizes, and observing their behaviour. To develop the investigation, students will need to make decisions for themselves about details of what to look for and how to interpret different behaviours.

k Students will have developed their own hypotheses to investigate. They could investigate the effect of size on pairing choices by measuring the relative sizes of pairs. This would involve capturing pairs of shrimps, measuring relative sizes, and analysing data to look for correlations between sizes of males and females in pairs.

Charles Darwin proposed two principal ideas to account for the diversity of life on Earth. While the Origin of Species was mostly concerned with natural selection, Darwin noted briefly in that book that sexual selection by mates was also a force for evolutionary change. He wrote:

“And this leads me to say a few words on what I call Sexual Selection. This depends, not on the struggle for existence, but on a struggle between the males for the possession of the females; the result is not death to the unsuccessful competitor, but few or no offspring. [1]” [On the origin of species, First edition, 1859, Chapter IV]

By 1871 Darwin had expanded those few words to take up the greater part of his second book on evolution: The descent of man and selection in relation to sex. Sexual selection, he suggested, was largely responsible for human diversity – a conclusion with which many of today’s modern evolutionary biologists would agree.

Teenagers find the social arrangement between the males and females inherently interesting to investigate!

Brine shrimps are herbivores in their ecosystem, feeding on algae and bacteria. In a natural salt-lake ecosystem there are no fish predators, but birds such as avocet and flamingos feed on the shrimps. Natural selection operates in this ecosystem as brine shrimps compete with one another for food. This is an opportunity to develop the concept of energy flow and material transfer between trophic levels.

Brine shrimps exhibit sexual dimorphism and pair for mating – male with female. The special case of sexual selection also operates. Males are competing with one another for larger females which produce more offspring. Females may be selecting male partners that are larger and stronger and help them to swim faster and so gather more food for eggs. Sexual selection would thus favour larger male shrimps. However, larger shrimps will be captured more easily from the water by flamingos.

www.survivalrivals.org
Brine Date was one of the Wellcome Trust’s experiments to celebrate Darwin 200. You can now buy the kit from Philip Harris.

www.britishecologicalsociety.org/articles/education/resources/curriculum/brineshrimp
Brine Shrimp Ecology by Michael Dockery and Stephen Tomkins, British Ecological Society, ISBN 1900579103. How to get hold of, and access downloadable sample material from, this invaluable book describing the culturing and use of brine shrimps.