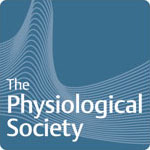 The classic model of the human breathing system (a Y-shaped tube connected to two balloons in a bell jar with a movable membrane across the base) is familiar to most teachers. Several variations on this using materials such as plastic drinking glasses, drinks bottles and other throwaway items have been suggested. As with any model, variations may enhance or reduce the similarity to ‘the real thing’ and its usefulness as an educational tool.

This model uses a single balloon and a plastic drinks bottle, and offers the opportunity to explore the effect of changing the diameter of the inlet/ outlet tube to model the effect of bronchoconstriction, and to better understand the breathing difficulties experienced by asthmatics.

You can set this up as a classroom activity, or as a homework exercise. Or, if you have made a few models, you could simply ask students to explore the difference in the function of each model during the course of a lesson.

For each group making a model:

Balloon, as large as is available

Tube, optional (different diameters if several models are made)

Plastic sheet cut into a circle 30–50 cm diameter (for example, a carrier bag) 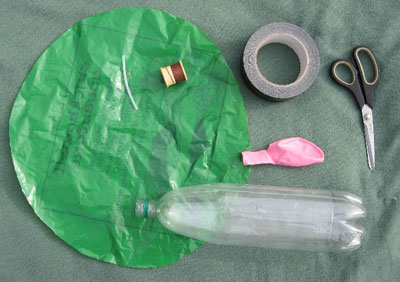 SAFETY:
Take care with scissors especially at the point of puncturing the bottle.

a Remove the label from a plastic drinks bottle by filling with hot water (to melt the glue) then peeling off.

b Use scissors to cut the bottom off the bottle as shown in the photograph. It really is easier to cut by cutting away from you into the back of the bottle (see photograph). 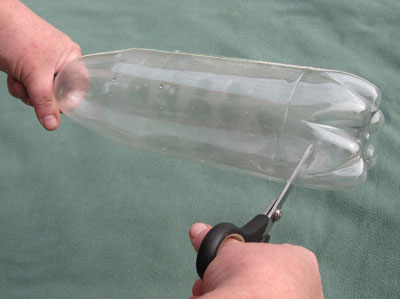 c Fasten a balloon to a piece of tubing using a piece of thread wrapped several times around and then tied tightly at the neck of the balloon. 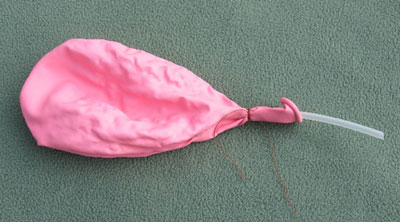 d Put the balloon into the neck of the bottle and pull the lips of the balloon back over the screw thread. 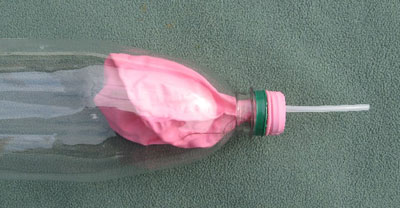 e Attach a piece of ‘gaffer’ tape to the plastic sheeting. This makes a tab to pull the model diaphragm up and down. 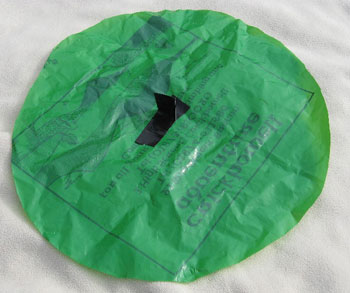 f Insert the plastic sheeting into the open bottom of the bottle and tape the edge of the sheeting to the bottle ensuring a good ‘seal’ all around. 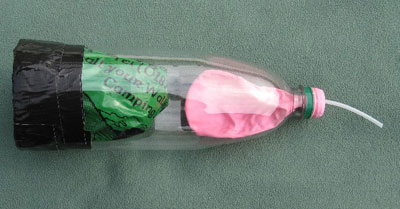 g Make several model lungs as described above – with different diameters of tubing or no tubing at all. 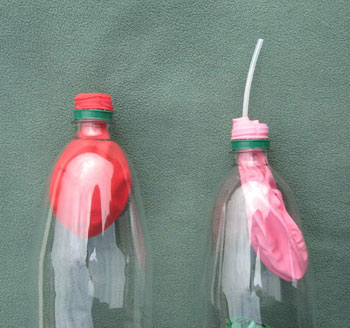 h Investigate the effect of moving the plastic sheeting up and down. If the bottle deforms as you pull the diaphragm out, add a reinforcing band of bottle plastic, or other rigid material.

j Compare the ease of moving air in and out of the lungs when the models include tubes of different diameters.

k Discuss the breathing difficulties that are experienced during an asthma attack.

Asthma is a condition where the bronchi get narrowe,r making people feel 'wheezy' and making it difficult to breathe or cough. People often feel a tightness in the chest and a shortness of breath. Emptying the lungs becomes especially difficult.

The bronchi get narrower for three main reasons:

Asthma sufferers are often hypersensitive to all sorts of things. This means that, for example, a very small amount of cigarette smoke (or other irritant) could trigger an asthma attack and cause wheezing, even though it would have no effect on non-asthmatics.

Varying the diameter of the main entry tube in the models does not quite mimic what happens in asthma, but is sufficient to get a couple of key points across. The narrower tube allowing air in and out of the balloon models the narrowing of the airways (bronchioles) during an asthma attack.

It seems to take more effort to push the air out of the balloons when the tube is narrower. This mimics the extra effort that an asthmatic requires to exhale against the resistance of the narrowed airways. If you could increase the pressure in the bell jar outside the balloons, you could show that this would speed up the emptying.

You could experiment with just balloons and tubes, blowing into a series of balloons through the tubes and timing how long it takes for the balloons to empty with different tube diameters. Also, if you took a balloon and let the air out, then did it again after squeezing the neck a bit so that it makes a noise, this demonstrates the cause of wheezing in asthma.

We are not sure what causes asthma although it does appear to run in families, suggesting a genetic component, although no specific asthma-causing genes have been identified. More is known about what triggers an asthma attack and how it makes it difficult to breathe. In some people, allergens trigger an asthmatic attack. Allergens include substances like pollen grains, fungal spores, chemicals such as pesticides, feathers, hair or skin flakes from pets such as cats and dogs. House dust mites are the most common cause of allergic reaction. The mites feed on dead skin and, in fact, it is their faeces that are the allergen! Exercise (especially in cold, dry air), cigarette smoke and the cold virus can also make asthma worse.

The reason why these factors trigger an asthma attack are not clear, but two reasons have been suggested:

Knowing this we can think of two ways to design medication to treat asthma:

Medications in the first group are called bronchodilators (dilate is another word for relax) and are very similar to adrenaline. Adrenaline was the first bronchodilator discovered but had unwanted effects on the heart; modern bronchodilators affect the heart less. Common bronchodilators are Ventolin (salbutamol), Serevent (salmeterol) and Foradil (formoterol). Bronchodilator medicines work very fast to cause relaxation and thus improve breathing, so they are often called 'relievers'. Ventolin is the most common reliever medication and is very quick to act. Its effects can be seen in a few minutes but they quickly wear off, so Ventolin has to be taken several times a day. The other two might take 30 minutes before you notice an effect; but then the effect lasts several hours. These bronchodilators would only need to be taken twice a day.

If you have access to an inhaler, it is interesting to demonstrate how squeezing the canister releases a cloud of medication in droplet/ powder form that is easy to breathe deep into the lungs. Almost all medicines used to treat asthma are given with an inhaler, because this delivers the medicine in a form and to a site from which it can be readily and rapidly absorbed. Similar canisters have recently been developed to deliver other medication in this way.

There are several types of inhaler available. The ones you get from your doctor or nurse have several names such as pressurised metered-dose inhalers, breath-activated inhalers and dry powder inhalers. For these you put the inhaler into your mouth and then you either breathe in hard to release the medication automatically or press the canister to expel a small amount of gas that pushes the medication into your throat. Small children and elderly often find this difficult, so the inhaler is often connected to a spacer. The medication is expelled into this chamber and they can breathe it in much more gently. During an asthmatic attack it may be difficult to use an inhaler. In this case medication can be delivered with a nebuliser which produces a fine mist that the patient breathes in via a face mask.

Spirometry (making measurements of features of breathing) is a useful test for asthma. In one test, you take a deep breath and blow as hard as you can into a tube connected to the spirometer. This measures your FEV1 (forced expiratory volume in 1 second) – the amount of air you can blow out in 1 second. If you are asthmatic your FEV1 will be lower than if you are not asthmatic. Alternatively, you can measure peak flow (with a peak flow meter!) – this measures the maximum rate at which you can expel air from the lungs. Again, if you are asthmatic, your peak flow will be lower than if you are not. 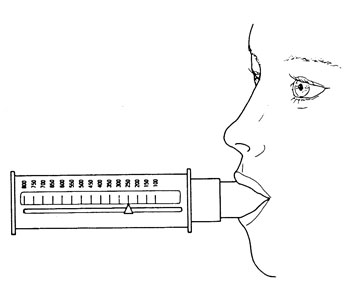 Over the past few years it has become clear that smoking can make asthma worse. It has now been shown that this is because it stops corticosteroids exerting their anti-inflammatory effect. That means the only effective treatments are the bronchodilators which only affect one of the three mechanisms narrowing the airways. Smoking is definitely not a good idea if you are asthmatic!

Modelling the human ventilation system (207 KB) with questions and answers.

www.asthma.org.uk
For any teacher or student interested in finding out more about asthma and how to manage or treat it, the Asthma UK website is a good place to start. It includes resources aimed at children as well as material with a more adult perspective and advice on current issues.