After initial teaching about the sliding filament hypothesis, this is a useful method for consolidating learning and identifying misconceptions.

This may depend on how you could provide students with access to animations of muscles in action – live on-line or downloaded, and at several terminals or on your main classroom screen. An assortment of materials allows free rein for students’ imaginations. This can be a time-consuming process. Assess its effectiveness with a follow-up test, using an examination question which has proved difficult.

1 In principle you could provide any materials for model-making. In practices some materials are particularly useful for modelling changes in the position of the myosin head, and for modelling binding and bending. These include plasticine or blu-tack, pipe cleaners and bendy straws. To distinguish one kind of protein chain from another it is useful to have materials in a range of colours. Cardboard, sticky tape and marker pens are also useful.

SAFETY: This will depend on the items you provide for making models and for cutting materials to size.

a Set out as wide a range of model-making materials as is practical.

b Allow groups of students time to talk through the process, from notes and diagrams you provide, and from animations viewed on-screen.

c Ask the students to make a model showing stages of the actin-myosin binding and bending process which powers the sliding filament model.

d (Optional) Take a series of digital photographs, or a short video, of the model in different positions to illustrate the cycle of events.

e Ask each group to present its model to another group, and to evaluate the strengths and weaknesses of its own and other’s models.

f Reflect on the impact that this activity has had on students’ understanding of the process, their knowledge of the structures involved, and their ability to remember the sequence of events.

Key things to look for in any animation are:

Here are some examples of models made by groups of teachers on CPD courses. 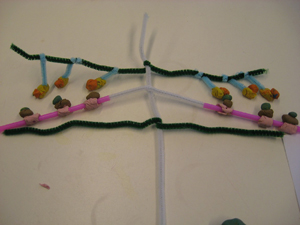 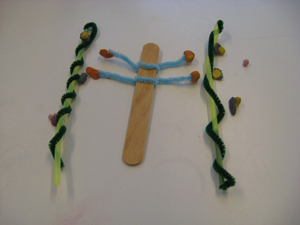 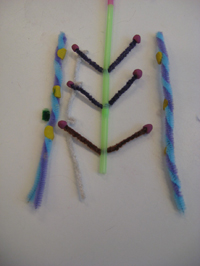 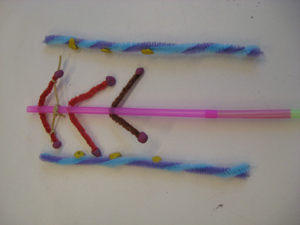 It might be interesting to point out that rigor mortis (stiffening of the muscles after death) sets in because energy is needed at the point of return of the myosin head. There is no new ATP, so no detachment of myosin, and so muscles go into contraction.

Much of the value of the exercise is in the process of trying to make a model do what it has to do, rather than succeeding. Students may be overly critical of their own model because it doesn’t do all the things they want it to do. It is important to reflect on positive aspects of the process in terms of students’ learning about muscle contraction.

There are dozens of on-line animations of muscle contraction and the sequence of events in the actin-myosin binding and bending process. This is a selection of examples that are clear and make useful starting points.

http://www.yteach.co.uk/page.php/resources/view_all?id=F_actin_G_actin_Glycogen_Myofibrils_Myosin_head_Myosin_tail_Phosphocreatine_Sarcolemma_Sarcoplasm_Sarcoplasmic_reticulum_Thick_filament_Thin_filament_Tonus_Tropomyosin_Troponin_T_tubules_oxygen_debt_maximal_oxygen_uptake&from=search
Y teach: If your school or college does not have a subscription to this site you will see the image on screen with a ‘preview’ message. Click to close this message and it appears behind the presentation very faint and does not seem to impede the functionality of the interactive site. There is a class activity and a whiteboard presentation, which contain similar slides but have different interactive demands.

http://bio.edu.ee/models/models/model_noframes.php?code=lihas&name=Muscle+cell+contraction&lang=en
The Volvox project team is a group of biology teachers and specialists from ten countries across the European Union. They aim to provide secondary school biology teachers and others with proven laboratory protocols, simulations, classroom activities and numerous other educational resources. This animation is in the Cell World section of the website and allows you to input one component at a time to a muscle-contracting system and see each stage of the process.

www.blackwellpublishing.com/matthews/myosin.html
Gary G Matthews Neurobiology – a series of animated diagrams of the stages of muscle contraction.