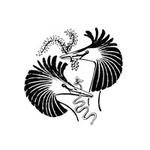 Cryptic colouration of the adult form is only one of the features of the peppered moth, Biston betularia, that enhances its survival rate. The larvae (caterpillars) of the moth resemble twigs, take on a colour that is similar to the colour of the food plant, and rest with their bodies at an angle to the twig which makes them hard to distinguish from the twig branches.

This protocol was developed by Michael Dockery, Laurence Cook, Nicola Edmonds and Julia Meneely for ASAB. The original documentation (a pamphlet called How to avoid being eaten) includes more detailed notes on melanism, cryptic colouration and daylight behaviour of moths and their larvae. The link below shows how to acquire the full resource.

Discuss strategies used by these peppered moth caterpillars to avoid predation, and other caterpillars if you have access to the information.

Present students with photographs of caterpillars on twigs – lined up against the protractor. Discuss how to measure the angle of rest and agree on a method. Measure the angle of rest and carry out analysis of the data. For work at GCSE level, this will include calculating mean, median and mode and constructing a frequency chart. At A-level you can also collect data about the angles of divergence of twigs of the main food plants for these caterpillars.; then work out mean, standard deviation, frequency analysis, and significance tests for correlation/ similarity between the angles of rest of the larvae and angles of divergence of the twigs.

There are no health and safety issues with this practical at GCSE.

If handling plant stems for the additional work at A-level, wear gardening gloves to handle rose or bramble stems, or hawthorn twigs – sharp thorns. Make sure students wash their hands thoroughly with soap and hot water after handling stems. Offer first-aid treatment for any cuts and scratches.

1 Peppered moth caterpillars feed on a variety of plants including rose, bramble, willow, birch, elm and hawthorn. It would be easier and quicker to bring 24 stems of any available food plants into the laboratory to investigate, rather than collecting from the school grounds during the lesson.

There are no ethical issues in using the photographs. If you choose to keep your own peppered moths and larvae for your own investigations, you would need to follow appropriate procedures to care effectively for the moths and larvae.

SAFETY: If working with stems with sharp thorns (in the A-level extension protocol), take care in handling the stems and offer first aid for any cuts and scratches. Follow appropriate hygiene precautions after handling material from the environment – make hot water and soap available for hand washing.

a Print, and laminate if possible, copies of the photographs of caterpillars – either the 15 from the GCSE set, or the 24 from the Advanced set, or a set that suits your teaching. Retain the alphabetic labelling of each picture for ease of identification.

b Explain the behaviour of the caterpillars and propose a hypothesis to test. An example hypothesis could be: 'Caterpillars of the peppered moth show a preferred angle of rest on hawthorn twigs.'

c Present an example photograph. and ask students working in pairs to decide how to measure the angle of rest.

d Swap pictures with another group. and measure another angle of rest. Compare the two results. Discuss possible variations in the way the angles have been measured.

e Present instructions for measuring the angles; reinforce why it is important that we have agreement on the detail of the method.

f Measure the angles of all the caterpillar photographs, and collate in a class table for further analysis.

There are more detailed notes on larval colouring and the ecology and behaviour of peppered moths and their larvae in the document available from ASAB – see link below.

The larvae of the peppered moth are typically about 2 mm in length when they hatch, dark in colour with pale stripes on the sides of the body. They usually have 5 moults, and between moults will feed almost continuously. The larvae stay on the leaves of the food plant for a couple of weeks, and rest on the twigs as they get bigger.

As they grow, the larvae gradually begin to resemble twigs, with bud-like heads and knobbles on the body. They are active and feed at night, but during the day they rest at an angle to the twig which enhances the mimicry. They stay rigid and motionless throughout the day unless disturbed by contact from another animal. Larvae take on different colours depending on the colour of the twigs on which they rest, being dark brown on dark twigs such as birch, and green on bright green twigs such as willow. They can even change colour slowly, with complete colour change requiring a moult.

The larvae used for this investigation have been reared on hawthorn, Crataegus monogyna. The photographic resource includes 24 photographs of larvae on twigs of hawthorn, selected at random from a series of images taken over a 3-week period in August 2008. To take each picture, a larva resting on a twig was placed on top of a standard school protractor, with the twig aligned to run along the horizontal (0°).

It is always easier to read the acute angle between the larva and the twig. A larva’s body has width, so it is important to devise a consistent method of measurement of the angle. This is the method recommended by the resource authors at ASAB. If you do not want to make permanent marks on your photographs, you can use tracing paper. 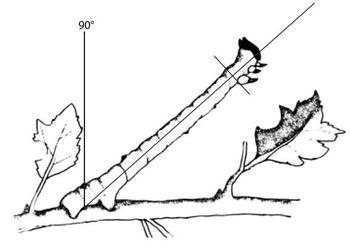 Step 1 Mark with a dot where the 90° vertical line on the protractor meets the body of the caterpillar on the twig.

Step 2 Draw a line across the body of the caterpillar just behind the final pair of legs. This line is usually 3-8 mm long.

Step 3 Mark the centre of this line with a dot, then join the two dots together, extending the line to cross the semi-circular edge of the protractor. Using the example images given, the line should stay within the body of the larva.

Step 4 Read off the angle of rest of the larva to the hawthorn twig – see diagram.

http://asab.nottingham.ac.uk/
The address for the education pages of the website for the Association for the Study of Animal Behaviour. Includes information about ordering How to avoid being eaten.