In this investigation, the speed of seed beetles is measured during horizontal and vertical movement.

This could be carried out in groups, with tasks allocated – timing, recording timings on paper, calculating speed, manipulating the seed beetles, and so on.

To store the seed beetles: (Note 1) 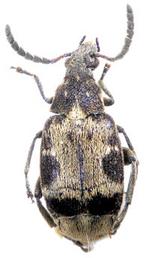 Some students may be allergic to seed beetles. Seek medical advice in the case of any reaction.

1 Keep the beetles in glass jars with a gauze and elastic band covering the opening. Give students one or two beetles in small beakers, also covered in gauze.

Take care not to damage or kill any seed beetles in the process of the activity. Teachers should be careful to introduce these animals in a way that promotes a good ethical attitude towards them and not a simply instrumental one. Although they are simple organisms which may not 'suffer' in the same way as higher animals, they still deserve respect. Animals should be returned promptly to their original environment after the investigation. This supports ethical approaches in field work, where collected animals are returned to their habitat after observations have been made.

a Measure the length of the thermometer tube.

b Place a beetle in a thermometer tube. Replace the cap so the beetle is confined to the tube.

c Using the stop clock, time the speed of the beetle travelling through the thermometer tube when it is horizontal on the work surface. Speed = distance x time, so you can time how long the beetle takes to travel a certain measured distance, or see how far it travels in a given time.

e Replace the beetle carefully. Repeat stages b and c with different beetles.

This investigation could be run following the procedure. Alternatively it could be run as an experiment, with students being given information about the beetles’ habitat, then asked to form a hypothesis and plan the experiment to test it.

The teachers resources page of the Association for the Study of Animal Behaviour has more animal behaviour experiments.